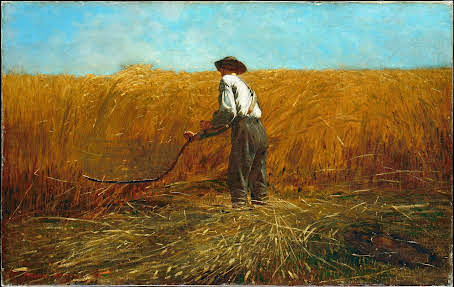 What Types of Paintings was Winslow Homer Most Famous For?

Winslow Homer was not only a skilled watercolorist but also a skilled oil painter and sketch artist. For the time in which they were produced, Some of Winslow Homer's watercolor paintings of maritime scenes, such as The Gulf Stream (1899), were seen to be very dynamic and potent. Even though Winslow Homer's subjects were straightforward at first glance, at their most emotional moments, they broached the issue of human suffering in the context of an indifferent universe.

The list of Winslow Homer prints, like oil paints and watercolors, are cheap yet hard to master. Paints are diluted with water, so a tube may go a long way, but errors can't be fixed once they're on the canvas. On the other hand, watercolor landscapes work well with light.

The Winslow Homer prints listed below are some of his best-known works.

This painting is one of artist Winslow Homer best-known Civil War pieces, describing the painter's keen grasp of the social-historical context of his work. A laborer harvests the wheat in the seemingly unending field with a scythe. The coat of a Union soldier and the flask in the bottom right corner shows that this peasant is also a retired soldier from the Civil War.

It was created briefly after the terrible conclusion of the war and the death of President Abraham Lincoln as a result. Nevertheless, this is an early sample of painter Homer's ability to include sensitive stories in his works. Winslow Homer's watercolor paintings combine Realist and Impressionist styles in an exceptionally American way from a creative standpoint.

The soldier's working figure is shown in a relatively genuine manner, showing the lone figure's arduous battle as he sweeps his blade over the wheat under the scorching sun. Although this image was created before the Parisian style or artist Homer's trip to France, the grain reads as Impressionist.

Artist Winslow Homer was used to working outdoors long before he left for France, so even if he was aware of Impressionism, he still needed to introduce him to the method of outdoor painting. As a result, it has been a significant part of his creative process since he first started painting. 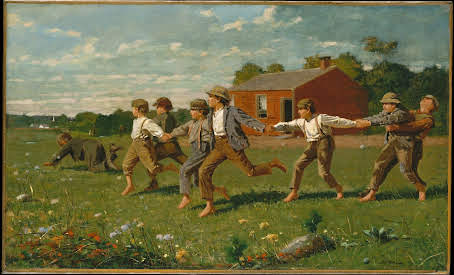 A famous picture by Homer presents a challenge to modern viewers. It seems straightforward and lovely if you want to learn about Winslow Homer, with a row of young people strolling hand in hand and dashing across a grass field in an amazingly brilliant Kelly green dotted with wildflowers of all shades. In the distance, a tiny red schoolhouse can be seen against a white and blue striped sky.

Unexpectedly, given that the artist is among the most well-known American ones of the 19th century, the image seems depressing, maybe even melancholy.

Looking carefully and detecting signs of poverty, like the kid's ripped and ill-fitting garments and bare feet, even Homer's most idyllic paintings transcend nostalgia. In the years after the Civil War, young age and the presence of kids took on unique importance in America. 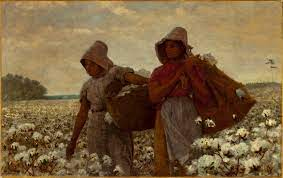 Homer traveled to Virginia (1870s) to start work on paintings describing the lives of people who had been liberated from slavery but were still struggling with ingrained bigotry. This was a time when there was a plethora of racist imagery. However, instead of perpetuating prejudices, he shows quiet moments in freshly liberated Black Americans' everyday lives.

Two ladies are standing in a large cotton field at harvest time, their heavy loads bearing witness to their daily labor. The two people's enormous size and the rose-colored sunset sky, which the French Realist regularly utilized in his sympathetic illustrations of rural work, symbolize Jean-François Millet's influence.

Homer's attitude towards these artistic creations is hardly instructive, however. 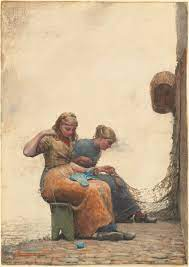 All artists Winslow Homer's attention was attracted by the elegance of the native way of life, which also gave the artist a new set of genre images that were only loosely connected to his expanding interest in sea subjects. The details in the piece show Homer's mastery of the demanding medium, particularly in the hair of the people and the fishing net.

In sharp contrast to Homer's earlier works, which depicted sophisticated ladies partaking in fun activities, the women are clothed shabbily and are concentrated on their job.

The style of Homer's English period surprises his critics, with one writing in the New York Times that they're quite English in approach and form. However, one must first analyze the signed name to know that the same artist is responsible for those English watercolors that either infuriated. 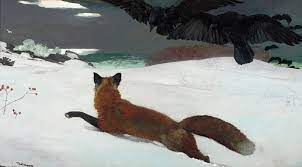 Homer's largest painting, Fox Hunt, is an excellent illustration of the matters he concentrated on in the early 1890s when he primarily abandoned illustrations of people working and interacting with nature. Alternatively, he concentrated only on capturing the outdoors. In this picture, he portrays a famished fox fighting to survive a swarm of starving crows.

The fox is depicted mid-stride but hampered by the thick winter snow; the overall composition gives the picture a sensation of great urgency. Giant crows tower enormously above.

The usual roles are changed as the fox that regularly hunts in this area becomes the prey in this scenario. The one sign of life is a cluster of bright red, deadly berries that stand out against the icy white snow, and the claw of the suffering creature reaches out to point to them-possibly a reference to one of the anticipated results of the scenario.

The acute diagonal of the fox, mirrored by the painter's name in the left corner, suggests movement for the animal, however, and aids the viewer in determining the result of this dramatic occurrence.

We hope you liked learning about Winslow Homer. We now have a better grasp of the life of folks who labor by the sea and in the countryside because of paintings by Winslow Homer. You may be interested in learning more about the life and works of Winslow Homer.