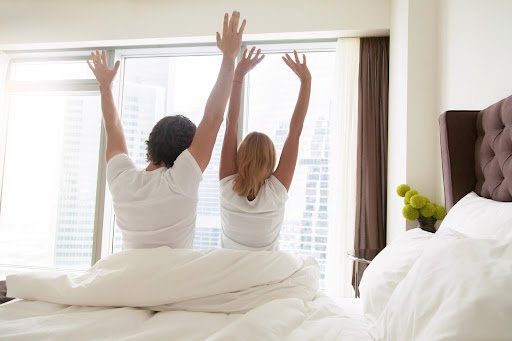 10 Benefits of Waking Up Early

Ben Franklin put it succinctly in his famous quote: "Early to bed and early to rise makes a man healthy, wealthy and wise."

I don't know about you, but for the longest time, I struggled to see how waking up early could do all that.

Even though it has been proven severally that the wealthiest men in the world wake up early on average, I didn't see how it could make so much of a difference until I started asking up early myself.

Now, I know that when you wake up affects so much of your life. Here are ten benefits of waking up that I've experienced.

People who wake up early usually go to sleep early as well so they can get enough sleep. To do this, you have to develop a sleep schedule that works for you and take supplements to help you wake up in the morning, which allows you to get up on time feeling refreshed.

In addition to getting enough sleep, people who sleep early and follow a consistent sleeping schedule enjoy a better quality of sleep. They feel more refreshed and ready to tackle the new day.

On the other side, most people who can't sustain a sleeping schedule where they go to bed late and wake up early end up having breakdowns.

Waking up early contributes to healthy eating. Most of the time, many people can afford to eat healthily because they plan. Dieticians would encourage things like meal prep because it's easy to eat healthy when you have access to healthy food. When you wake up early, you have enough time to get ready for work, so you can start your day with a healthy breakfast instead of rushing through your toilette and grabbing a pastry and a cup of coffee at your local Starbucks.

The ripple effect of eating a healthy breakfast is that you stay energised, alert, and productive by equipping your body with the proper nutrients for the day.

Have Time To Exercise

Too many people complain that they can't fit exercise into their daily routine. In the mornings, they wake up late and barely make it to work, and after work, they are too tired to drop by the gym.

Waking up early solves this problem. When you wake up early, you can spare 15 to 30 minutes to work out; when you do, you're even more energised for the day.

Get To Work Early / Easier Commute

No one talks enough about how frustrating and stressful the morning commute can be in peak hours. After an arduous commute to work, one might require a few minutes to settle down and tackle their work for the day.

The thing with morning commutes is that a little goes a long way. You can avoid the craziness of morning rush hour just by getting on the road 5 minutes earlier. People who wake up early often enjoy a hassle-free commute to work and a stress-free start to their day.

Helps You Stay Alert During The Day

Since most early risers retire early, they get enough sleep and wake up alert and energised. They can work all day without feeling too much fatigue and stress. Those who don't get enough sleep quickly feel overwhelmed by the afternoon, even with copious amounts of coffee.

Helps You With Time Management

A few things encourage time management, like waking up early. On average, people who wake up early have more working hours in a day and are liable to use them well. Although early to bed is early to rise, the working hours of the day for the body of the average Joe working regular hours is between morning and early evening. People who wake up early can get their work done within this time, have enough time to bond with their families, and still go to bed early in preparation for another day.

Also, because people who wake early go to bed early, they manage their time well so they'd be done with their daily tasks by nightfall.

Waking up early reduces stress levels by a wide margin. Think of this scenario. You wake up late and spend the morning dashing through your routine to resume work on time. You hit the morning rush hour on your way to work and have to queue at the local Starbucks near you for coffee while staring at your timepiece because you're already late. You eventually get to work a few minutes late or a minute early.

Compare this with someone who wakes up early and has enough time to get ready, eat breakfast, and make it to the office with time to spare.

The first person has already begun their day with stress, and it sets the tone for the whole day. They would only get more stressed as the day went by. Starting your day with minimal stress also sets the time for the rest of the day.

The stress one has with waking up late and scrambling the whole day to meet up can adversely affect the skin. For one, waking up late, especially after sleeping late the previous night, can cause eye bags.

Stress also puts your hormones out of balance and can cause acne breakouts and other skin conditions such as psoriasis, eczema, and seborrheic dermatitis. Just going to bed early can make a difference in your skin.

Makes You a Better Problem Solver

Doing your job well is challenging when you're tired, sluggish, stressed and unprepared for the day. Most people who wake up late are all of the adjectives given above, including uncomfortable. It takes a few hours to settle down and start being productive mentally after late morning.

If you're an early riser, chances are high that you're also going to be a great problem solver at your workplace. Waking up early means you skip the morning craziness and arrive at work mentally prepared. And in this state, you can process information, examine problems, and propose solutions.

If you're not pulling your weight at work, getting a good night's rest and waking up early can help.

Frees Up Me-Time For You

The world is moving at a fast pace every day. It is often challenging to find time for yourself to meditate and be introspective about yourself. Me-time is essential for personal growth and also for doing things you love to do. People who make out time for themselves are better balanced, display higher levels of productivity, and have more success hitting their goals.

Waking up early allows you to carve out some me time. It can be as little as 10 to 15 minutes every morning. But at the end of the month, the time piles up, and you'll be better for it.

In conclusion, waking up early impacts so many aspects of our lives, which often goes unnoticed until we begin prioritising it. If you're a perpetual late riser trying to wake earlier, consider going to sleep earlier and making small, consistent changes to your wake-up alarm.