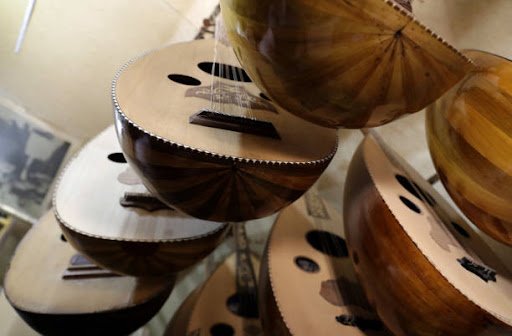 Understanding The Difference Between Turkish Oud and Arabic Oud

Turkish oud is very similar to the Arabic oud. However, Turkish ouds are tuned one whole step higher than Arabic ouds. That means the tension the strings exert on the face of the Turkish oud will be increased since the tuning is higher.

The Arabic Oud has an elegant aesthetic and produces sweet romantic tunes. On the other hand, the Turkish oud has a distinct yet plain appearance and produces a very pure sound. There are still a few significant differences between the two ouds. Let’s get to it!

What Are The Features Of The Turkish Oud?

Turkish ouds are often straightforward. They typically have a string length of 58.5cm, with 19-21 ribs in the back and a basic trim around the face and sound holes. Turkish ouds have a brighter tone in the high registers due to their size, type of wood used, and the string’s tension. They are somewhat smaller and wider in design than Arabic ouds.

The Turkish oud bowl's body is made of woods such as mahogany and walnut. The tuning pegs are made of ebony, just like in classical instruments like violin. The soundboard is constructed entirely of spruce wood, which gives it a natural look with minor variations in wood tone. It has three spherical sound openings, each one embellished with exquisite goatskin rosettes.

To play the Turkish Oud, you hold it by the right hand and strum it with a pick popularly known as Risha. When plucked, the turkish oud strings vibrate out of phase with each other.

For Turkish Ouds, The Most Frequent String Tuning Is:

What Are The Features Of The Arabic Oud?

Arabic ouds have short necks, scale lengths ranging from 60cm to 61.5cm, and a pear-shaped body. They consist of 11 to 12 strings that are organized into 6 double courses. However, the most common design has just 11 strings.

The sound from an Arabic oud is typically regarded as romantic, profound, and well-balanced. It is perfect for serenading lovers on the steps of buildings while they blush gleefully.

Arabic ouds usually have a thicker soundboard, which contrasts wonderfully with the decorative rosettes that surround the three sound holes. Also, a trademark deep bowl characterizes the Arabic ouds, and it emits a soothing tone that seems to vibrate through your soul.

Keep in mind that the Arabic oud is one step lower than a Turkish oud. The sound and pitch produced from the Arabic oud are primarily because of how the strings are wound and the type of wood used.

The Most Frequent Tuning For The Arabic Oud Is:

Yes, both the Arabic oud and Turkish oud are very similar, but there are marked differences in both instruments. The difference between both ouds in terms of actual performance pitches is easy to perceive. This is because Turkish oud tuning is one step above Arabic oud tuning. If an Arabic oud's initial (highest pitched) strings are tuned to 'c,' they would be set to 'D' on a Turkish oud.