What are the key elements that comprise Pakistani Outfits?

Pakistan clothing is one of the most unique and distinct kinds of clothing globally. It is ethnic wear for the Pakistanis. The Pakistani outfit represents the country's culture, demographics, and the culture of other regions. Each regional culture's clothing reflects the weather, manner of life, and specific style that distinguishes it from other civilizations.

The shalwar kameez is the national Pakistani dress worn by men and women in all provinces. The terms shalwar and kameez refer to loose pants and shirts, respectively. Since 1982, all secretariat employees have been expected to wear the national dress.

Men dress in shalwar kameez, kurtas, Pakistani waistcoats, achkans and sherwanis, churidars, and pajamas. The Jama and angarkha are two more types of attire. The Jinnah Cap, also known as the Karakul, the Fez, the Rumi Topi, and the Taqiyah, are headgear (cap). Chappals and Khussa are popular footwear in Peshawar. Traditional shawls made of Pashmina or other warm textiles are also available, particularly in northern areas. Every province has its distinct cultural wear, which rural residents primarily wear. For instance, Balochistan men wear a long Jama (robe) that reaches the heels, a loose shalwar, a long chadar or scarf, a cotton pagri, and typically shoes that are narrow at the toe. The fabric is thick, with a long shalwar to defend against the harsh winds of the parched Sulaiman Range and Kharan Desert. The Sindhi people wear a different type of salwar called Suthan with a kameez called cholo. The Sindhi hat and Ajrak, both created locally, are examples of traditional apparel. Men also traditionally wear the dhoti and the long angerkho.

On the other hand, women also wear salwar kameez in different designs, colors, and styles. The sleeve length, shirt length, and necklines of the kameez may all be customized. Straight-cut salwar, Patiala salwar, churidar, or basic trousers can be used as drawers. You can shop your favorite attire at pk.sapphireonline.pk from their classy collection in various styles.

In today's metropolitan fashion, the dupatta is only an accessory. Most women who carry it nowadays use it as a decorative item, wrapping it around their neck or draping it over their shoulder. In metropolitan regions, most of the young generation does not have it at all. Some women wear a dupatta before entering a mosque, dargah, church, gurdwara, or mandir; on the Indian subcontinent, it is customary for women to cover their heads with a dupatta when entering such sites. Women wear it to weddings and other celebrations because it is fashionable. It is primarily wrapped around the waist, neck, or merely put on a shoulder in such situations. It is utilized with different embroidery designs like Kamdani and Gota.

In addition to the shalwar kameez, Pakistani women have a range of traditional garments on important occasions such as weddings, engagements, mehndi, and other formal events. 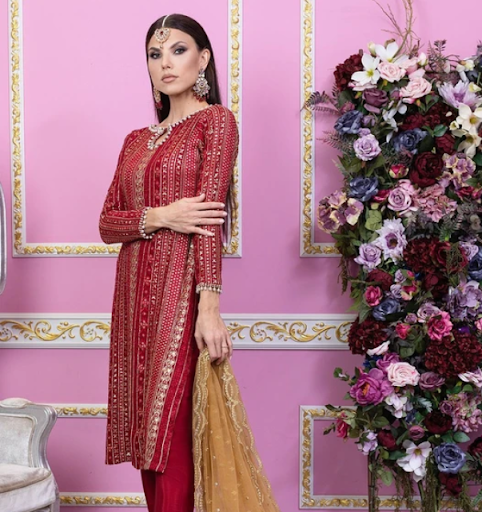 The most popular costumes are the ghagra choli and saris, which come in various designs and colors, such as a lehenga-style sari. Another famous piece of clothing that looks like a skirt but is a traditional dress is the lehenga. The gharara and sharara are two similar gowns frequently worn at religious ceremonies. For instance, the Farshi Pajama is antique traditional clothing that is only worn on special occasions. Punjabis wear laacha, which has a bottom half that mimics a dhoti.

In conclusion,  although shalwar kameez is the national Pakistan outfitsv,there are various Pakistani oufits for both men and women and some that are reserved for special occasions such as weddings.