Atlanta Travel Ideas: 4 Most Amazing Parks to Go by Car

Atlanta is a great holiday destination any time of the year. Being the capital of Georgia, it’s quite a well-known city when it comes to travel. Galleries, museums, historical and cultural attractions, as well as entertainment venues - you will have a huge selection of places to explore.

Incredibly beautiful parks are another feature of Atlanta. Rent a car and your trip to the heart of Georgia with its amazing green areas promises to be exciting. Thousands of Routes car rental Atlanta reviews confirm this fact.

A rental car will allow you to freely choose where to go. In addition, the relatively low rental car taxes and fees in the state allow you to count on a cheap price. This will be an excellent background for a budget trip.

Well, which parks to visit in Atlanta? Start the engine and go to the following spots!

With an area of ​​almost 200 acres, Piedmont Park is located northeast of downtown Atlanta. You can easily find it when traveling around the city in a rental car.

This is the largest and most popular park both among travelers and locals. It’s not only a walking area, but also a sports center, as well as a venue for various festivals and concerts. The park has a lot to see. Many tourists come there to admire beautiful sculptural compositions. In addition, a small dancing fountain was recently opened. It brings a lot of positive emotions to both children and adults.

While walking along the well-groomed paths, you can breathe in the fresh air, and also enjoy the beautiful views of Midtown. If you value nature more than modern architectural achievements, be sure to visit the Atlanta Botanical Garden, located in the historic part of the park.

The park also has a clear lake that is home to geese and other waterfowl. You can fish in it and even swim in warm weather. Baseball and volleyball courts, indoor picnic areas, football fields and tennis courts, jogging tracks, and a swimming pool are all located on the territory of Piedmont Park. Also, there are special children’s playgrounds on the territory.

Do you want to take a break from the bustle of Atlanta? Take your rental car and head to the public Centennial Olympic Park, where you will have a pleasant time. This is a real oasis of peace and quiet, located within walking distance of the World of Coca-Cola Museum and Georgia Aquarium. About three million people visit it annually.

The layout of the Olympic Park is impressive. Its walking paths are a natural extension of the central streets of Atlanta, while the landscape and sculptures fit perfectly into the urban ensemble. The most remarkable object of the park is the Olympic Rings Fountain. It’s controlled by a computer that synchronizes the jets of water with lighting and musical effects. The fountain presents a particularly beautiful spectacle in the evening, in the light of bright illumination.

Centennial Olympic Park is renowned for hosting various festivals and family events. In addition, several playgrounds have been built on its territory. Therefore, it’s a great place to go with kids. 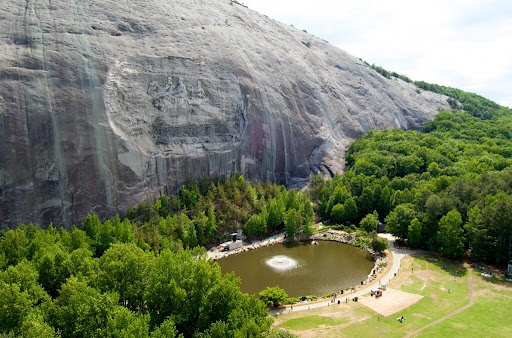 Located southeast of Atlanta, Stone Mountain Park is home to many impressive events. Among them are the Autumn Pumpkin Festival and the Indian Pow-Wow. However, this remarkable place is also famous for its huge granite mountain, which attracts many visitors from all over the world. It’s situated 18 miles away from Atlanta. A rental car is the most convenient way to get there quickly and comfortably.

The height of Stone Mountain is a little more than 250 meters. At its foot is a reconstructed 19th-century American city with a water tower and a mill, as well as a workshop where you should definitely learn how to make various glass products on your own.

On the side of the mountain, you can also see the Confederate Memorial, which features bas-reliefs of President Jefferson Davis and two U.S. generals. Stone Mountain Park has a cable car that allows you to quickly climb to the top of the mountain. Once at the top, you can enjoy an almost moonlit view, with the modern buildings of downtown Atlanta on the horizon.

Hikers can follow the park's hiking trails, one of which leads to the summit along the western slope. If you come to Stone Mountain Park with children, be sure to visit the local rides.

Grant Park in Atlanta is one of the oldest parks in the United States. Throughout its history, the park has changed many times, but eventually turned into a great place to spend time. Today, visitors can relax here, strolling among its green spaces, as well as admire the fountains and small ponds.

Children in Grant Park will also find something to do: a large playground has been built especially for them. However, boys and girls like to go there for one more reason. The Atlanta Zoo is located on the territory of Grant Park.

If you are fond of history, be sure to visit the cyclorama in the park, dedicated to the events of the American Civil War. Here you can watch a short documentary, as well as see the recreation of battles with special effects.