I had a sit down interview with Dame Zandra Rhodes as we spoke about pink hair, being unique in the fashion industry and slaying it at 75 years young. 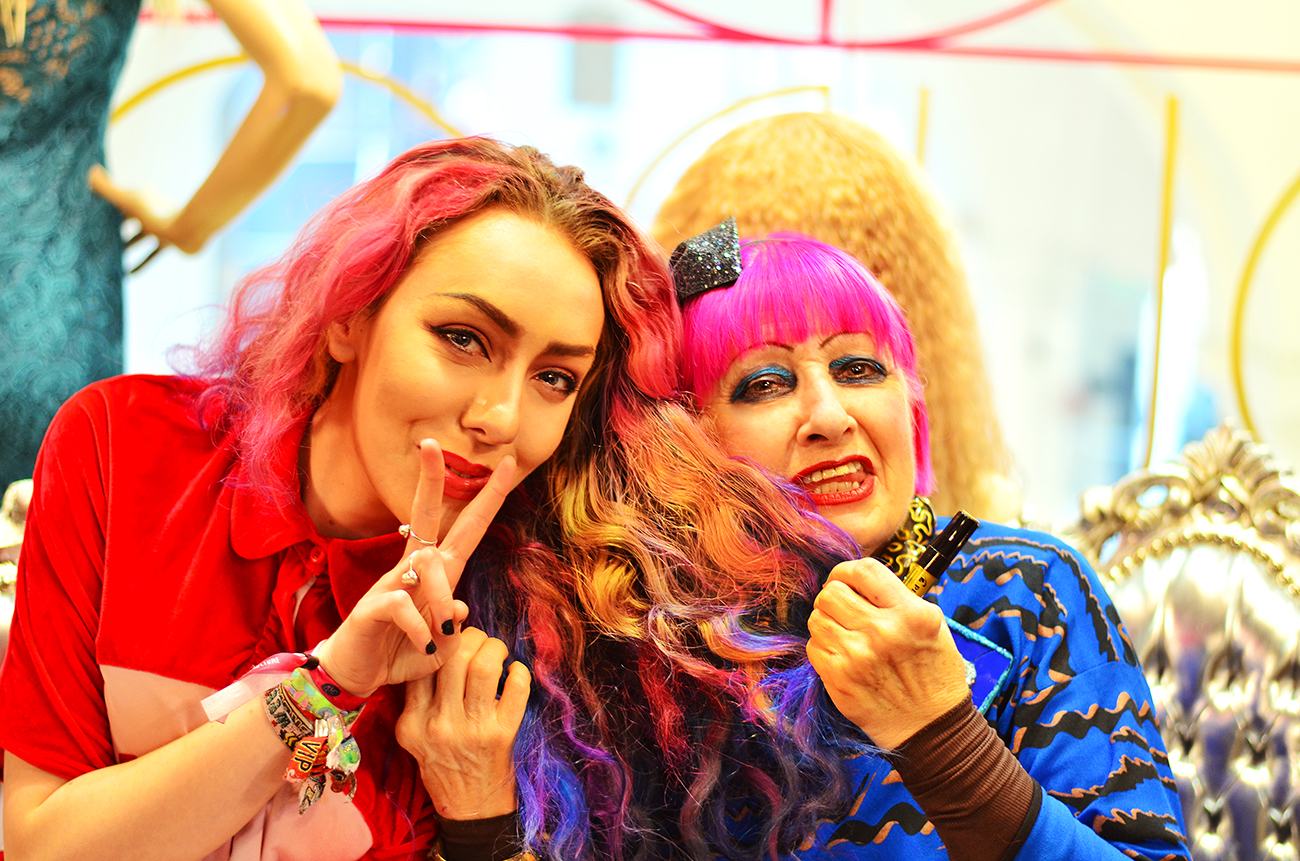 Let’s just start off with saying it’s like looking at an older version of me, she doesn’t give a bloody damn about the mainstream and vents her creativity into a collection of things.

Fashion seems such a generic term these days, when artist might be the best way to describe the pink haired mistress! I’ve been a big admirer of her work, and she was my main inspiration years ago to go pink and bold. The one thing she stands for is independent unique design and it truly shines through in her personality and a true inspiration to people like myself who believe in nothing but being yourself in this world. 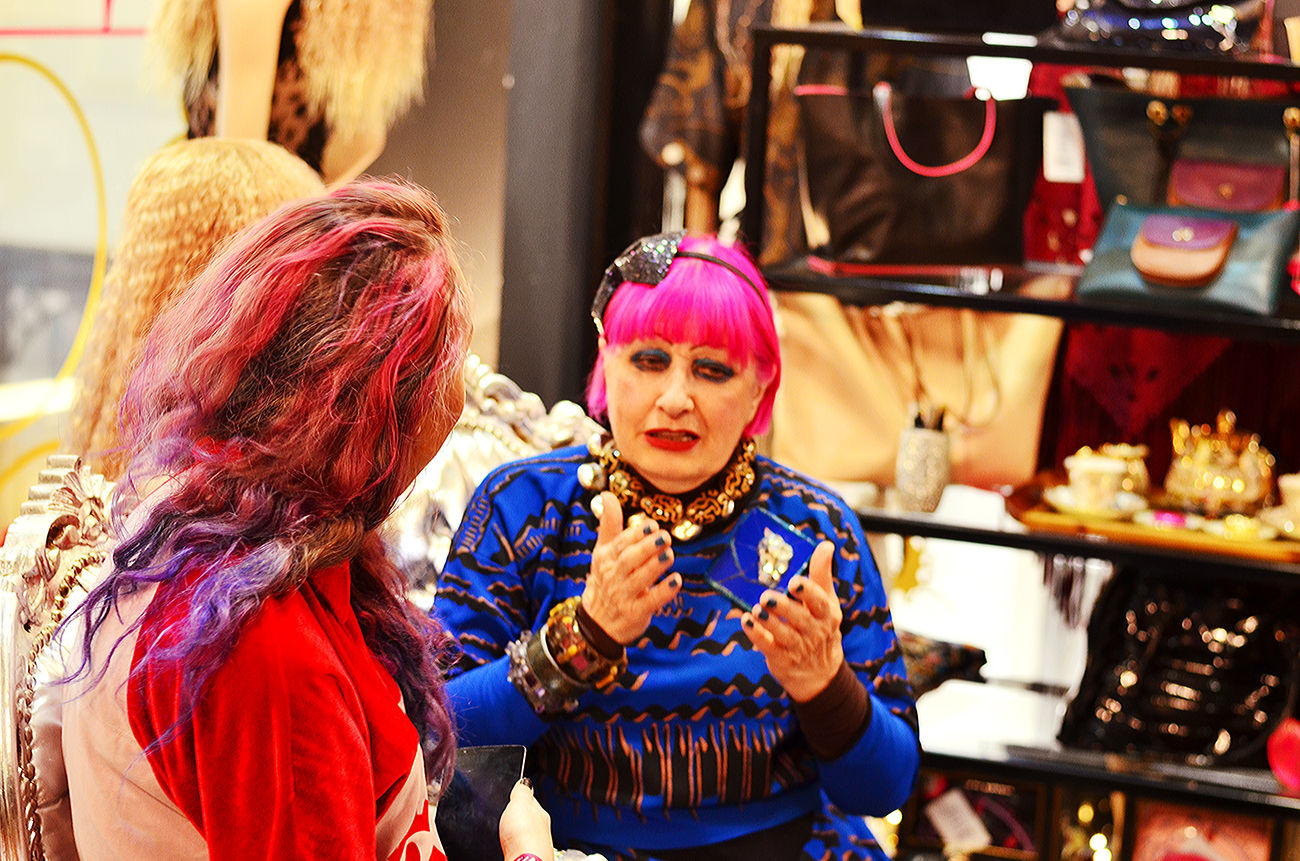 Her latest collection was showcased over at Boudoir Boutique a stones throw away from The Cavern tucked away in The Cavern Walks, one of my newest hidden gems of Liverpool as the finest and loveliest women shop for incredible clothes whilst indulging in a boudoir experience. I’m still head over heels for this place, and very fitting to have a Dame in sit upon a throne to meet and greet! 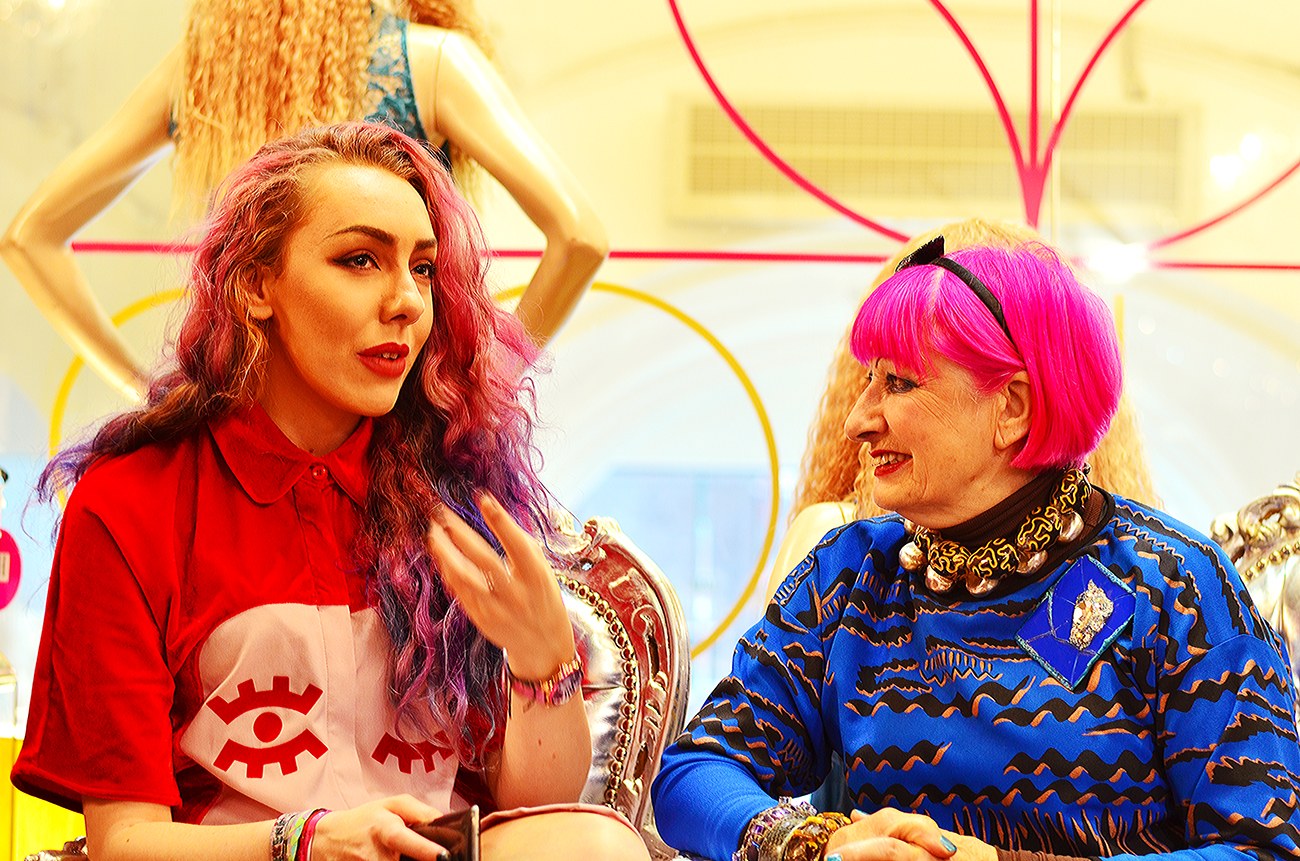 Ironically she started asking me questions about my pink hair, my fashion and blog, which was super flattering till I remembered this was my interview.

But my first question was about her latest collection, her inspirations and what kind of women do we see her designs on, she replied “I like to think they would be on all sorts of women, some with coloured hair, and perhaps some women who are feeling more ordinary! Everyone looks different, we all function independently and make our own statements if its understated or dramatic, we make statements and I like to think my bags will let someone make a statement whether thats something very plain and the bag adds beauty or something that blends!” 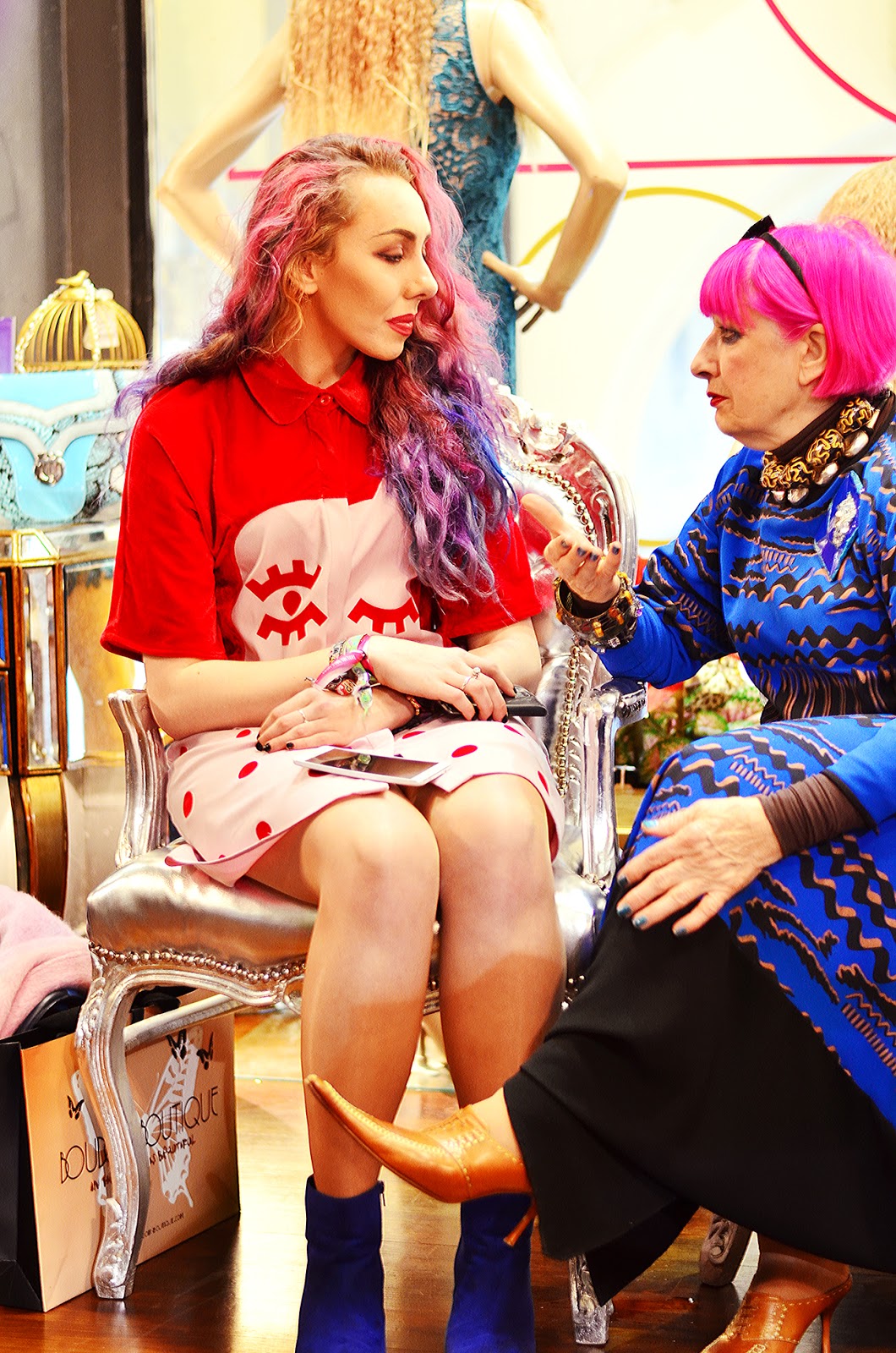 I asked her if designers like herself have to be more controversial to be heard, she remarked “I don’t actually think about it, I think I’m quite lucky as I just do it and hope it’s what people want, because I suppose like you say I’m an instinctive designer and I do it and then think would I wear it instead of think “Oh I’ve got to design something so commercial!” so I don’t think of it that way at all.” But I mean you do your hair like that regardless as it builds you up and makes you feel great thats how I see it!”

Which lead onto the obvious question of them all, what made her dye her hair pink initially!

“Well it was green initially in 1971, and because I was a textile designer I assumed that fabric dyes worked, if I worked on silk or wool it worked on my head. It was in China in 1980 that I decided “Hey I’ll dye my hair pink!” to which I told her instead of a silver fox with grey hair underneath, it’s people like us that will be pink foxes when we’re old! 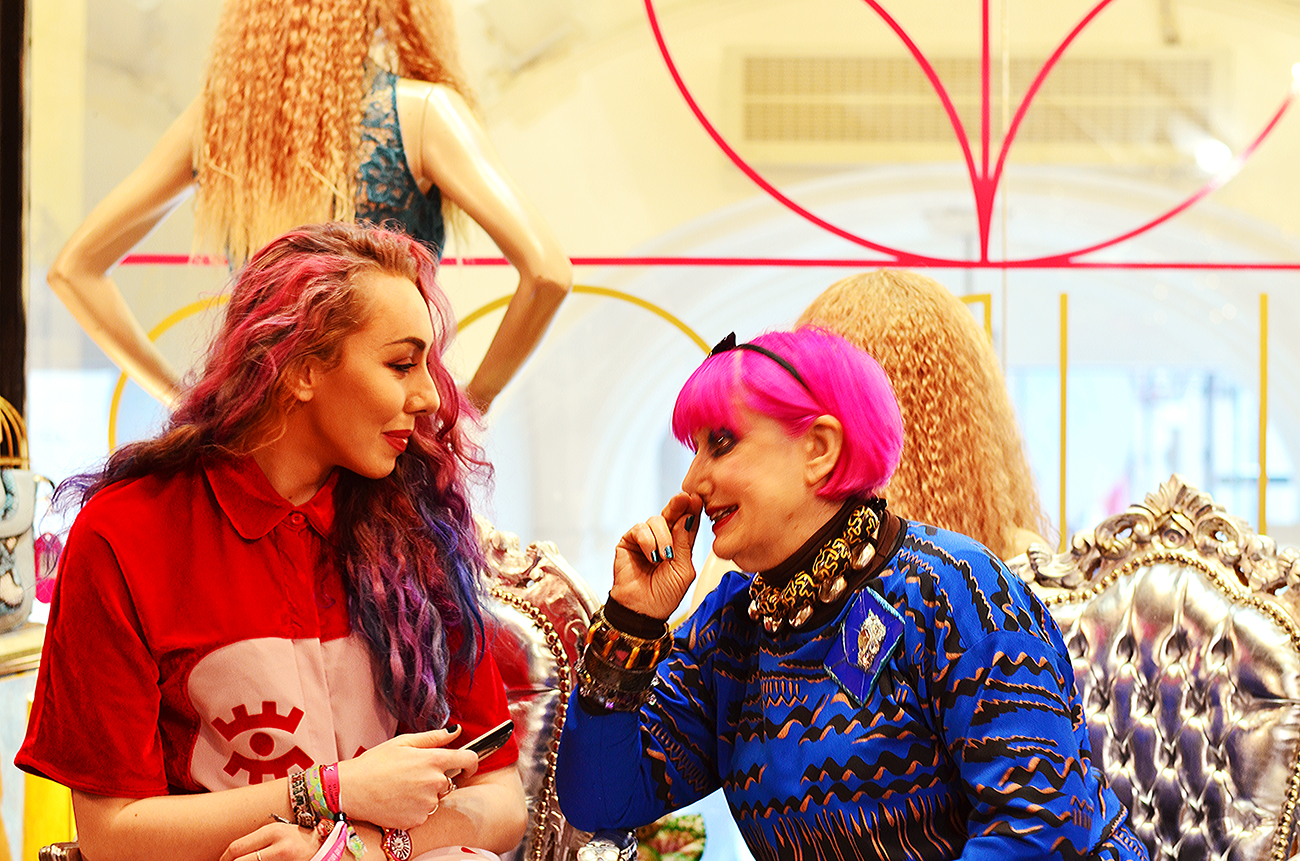 I brought it back to the now, with a question about what designers had been grabbing her eye lately. “I’ve found it varied lately, that Jean Paul Gautier exhibition was wonderful. He’s a designer that just keeps on going regardless of whether Vogue magazine takes any notice. I tend to go within myself because sometimes I don’t want to be influenced by what other people do and I try to put out things that are different, because otherwise what is the point?”

We discussed blogging, university and why on earth I haven’t tootled off to London, I could have sat here for hours it was super refreshing and ending on two final questions.

As someone who celebrates the controversial how does she stay inspired in every day life; “To some extent you’ve got to lock yourself away to get it all down, and when you see inspiration you go “Oooh that’s amazing” as you home in on what you like again. When I do come out I come out to place like this (Boudoir Boutique) and it gives me a buzz, so I have a variety from that point of view of inspiration I keep my eyes open!” 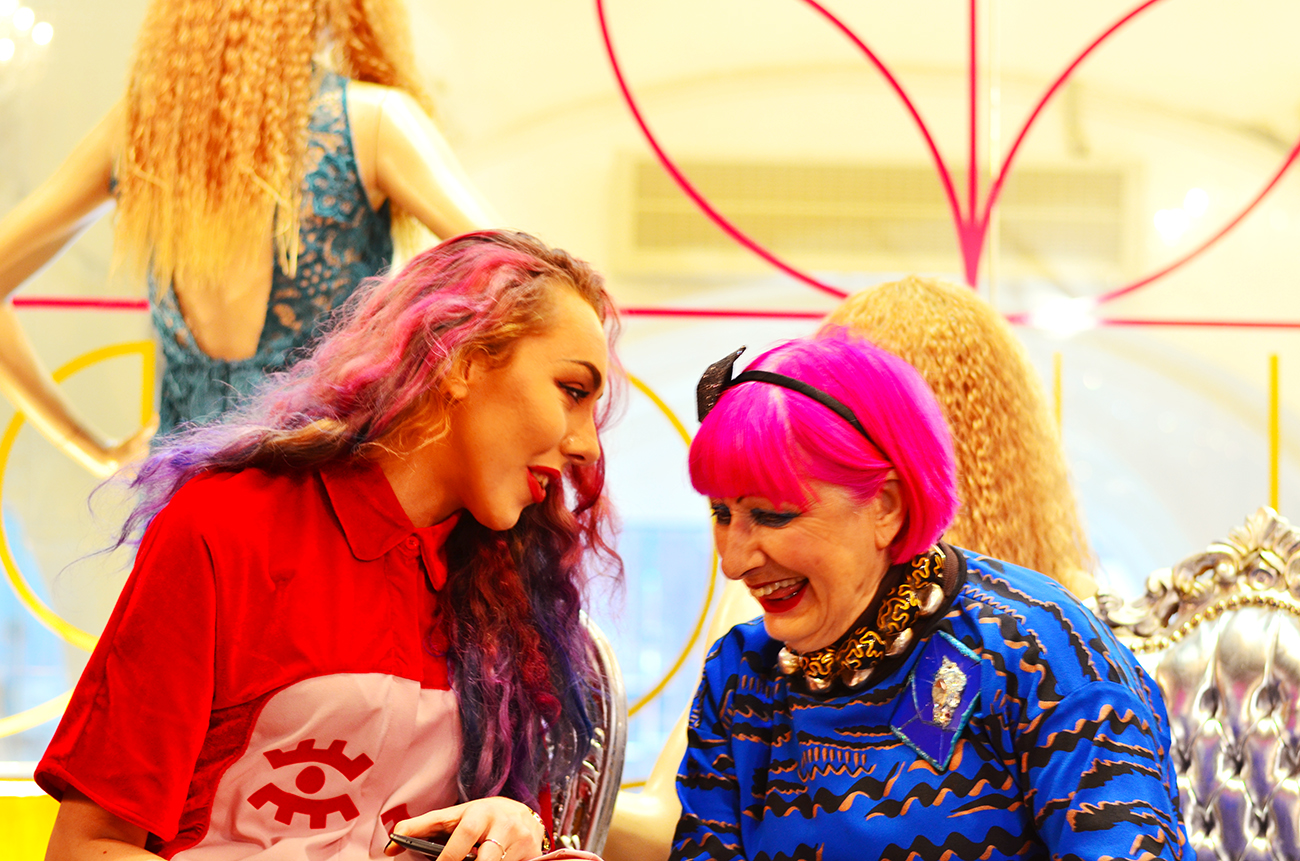 The final question of the afternoon was knowing her secret to staying sassy at 75. “Eyeliner right round my eyes so you can’t see the bags!” 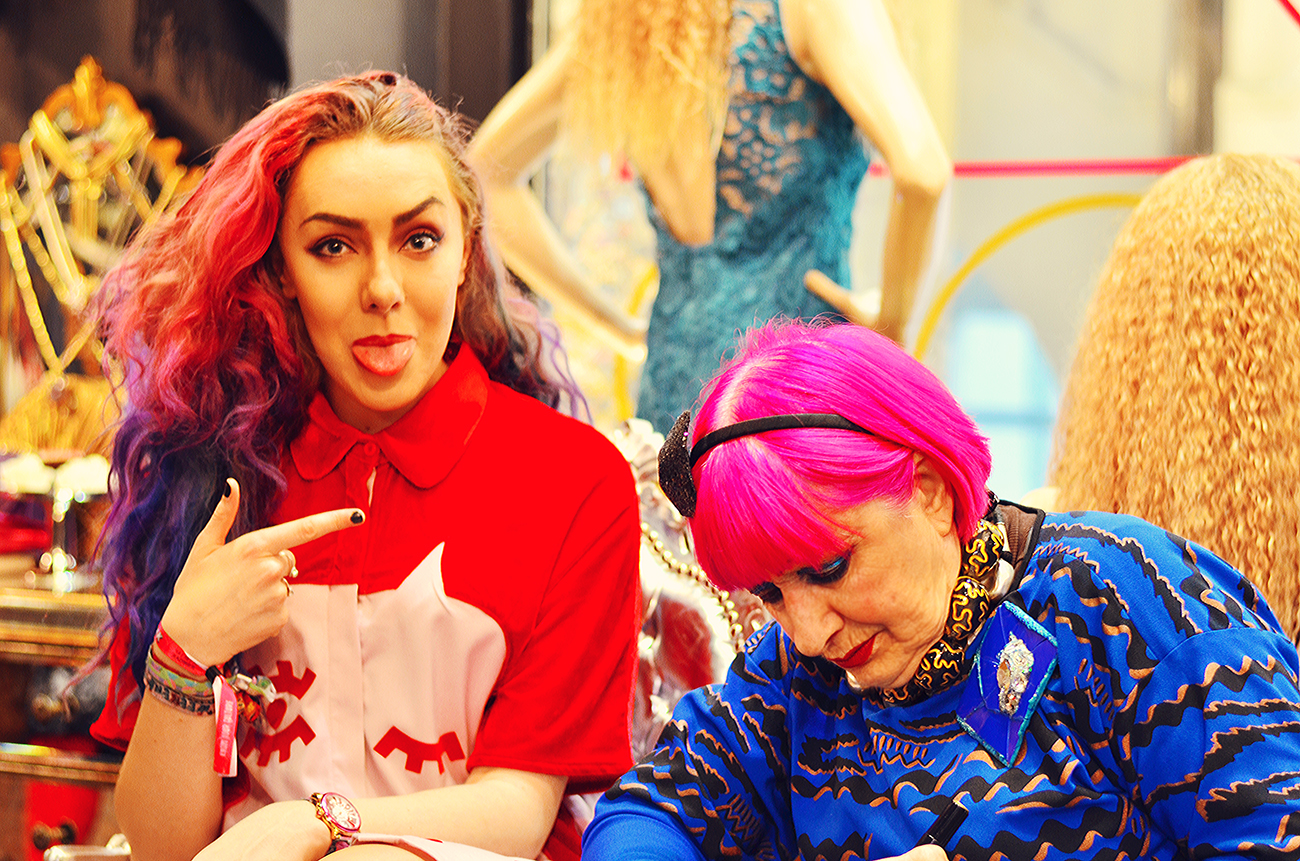 Her views as a designer are so raw and real, she just does what she does without any notice from the outside world, a truly respected opinion to be noted. I ended my afternoon with a early Christmas present of one of her purple velvet bags signed in gold pen. Perhaps one of my favourite days ever.