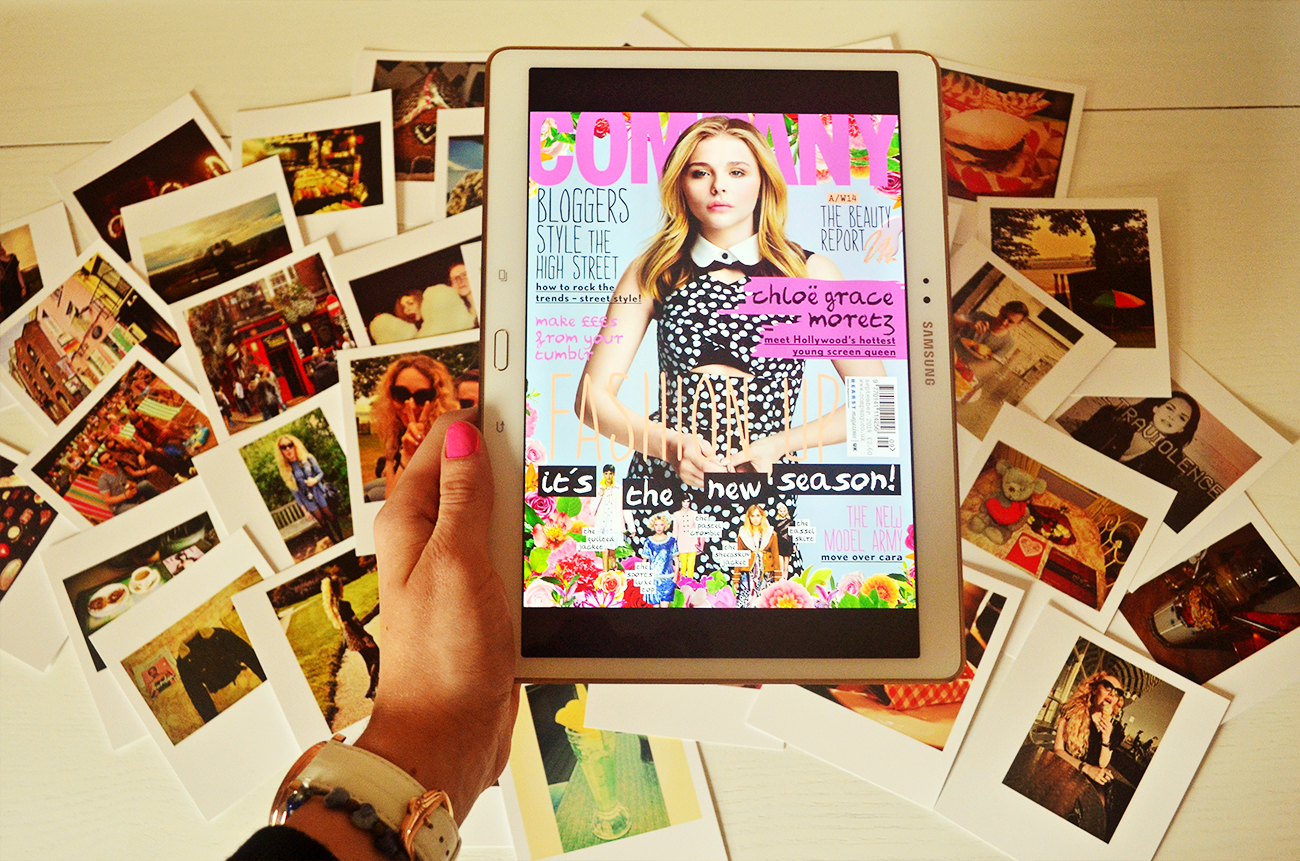 I was called silly when tablets were first introduced, drowned in pity at the idea that they would take off, alike Alan Sugar stating  ‘Next Christmas the ipod will be kaput’ and what a very foolish man he was. Tablets have grown superior to print and are taking over the need to have phones and laptops, who wants all that technology cluttering up their bags and homes?

If given the decision between a tablet with internet and a phone I would always pick the tablet, so I was a very happy girl when I received this through my letter box, this is the brand new Samsung Galaxy Tab S*, the latest tablet on the market today. I am also the owner of a Samsung Galaxy Tab 2 10.1, but now there’s a new addition to the family this far overshadows previous additions.

I am going to be showing how it has massively helped me in my day to day errands, after only a few hours of tinkering about like a kid at christmas 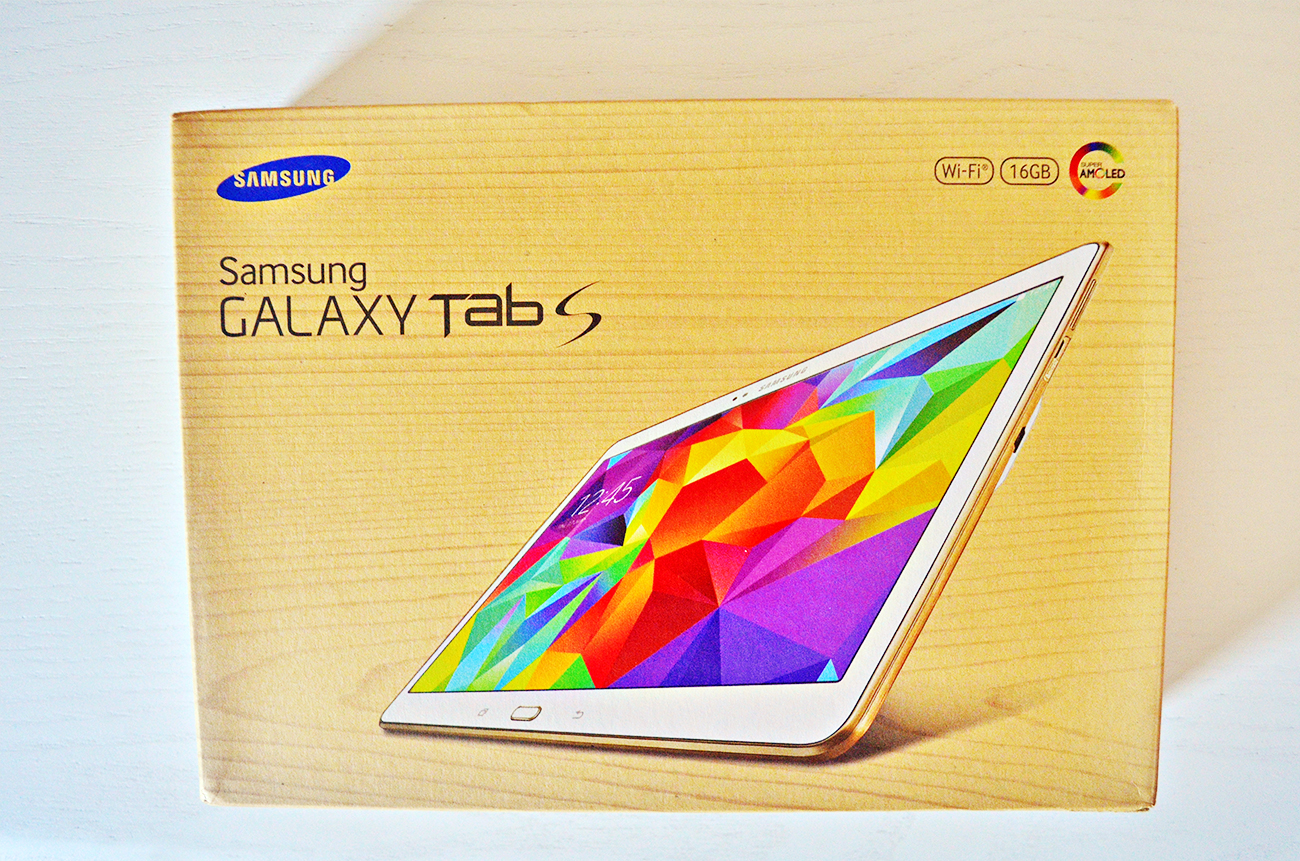 So I may of sat on the floor by the front door for about an hour flicking through the home screen and the transitions of pretty colours before realising what I was doing and maybe I should start acting like an adult. It did that to me.

The first thing that caught my attention on start-up was the beautiful lock screen you are graced with, that when strung in various directions creates a beautiful unique sound, almost an app in itself!
I found the transitions between screen to screen to be swift, smooth and tastefully designed

The jewel in the crown of the Galaxy Tab S is its display, which comes courtesy of Samsung’s Super amoled screen technology and expresses more colours than a standard tablet with a contrast ratio that makes blacks darker and whites brighter. Watching HD films is an entirely new experience because of the extra rich and crisp colours on the screen. 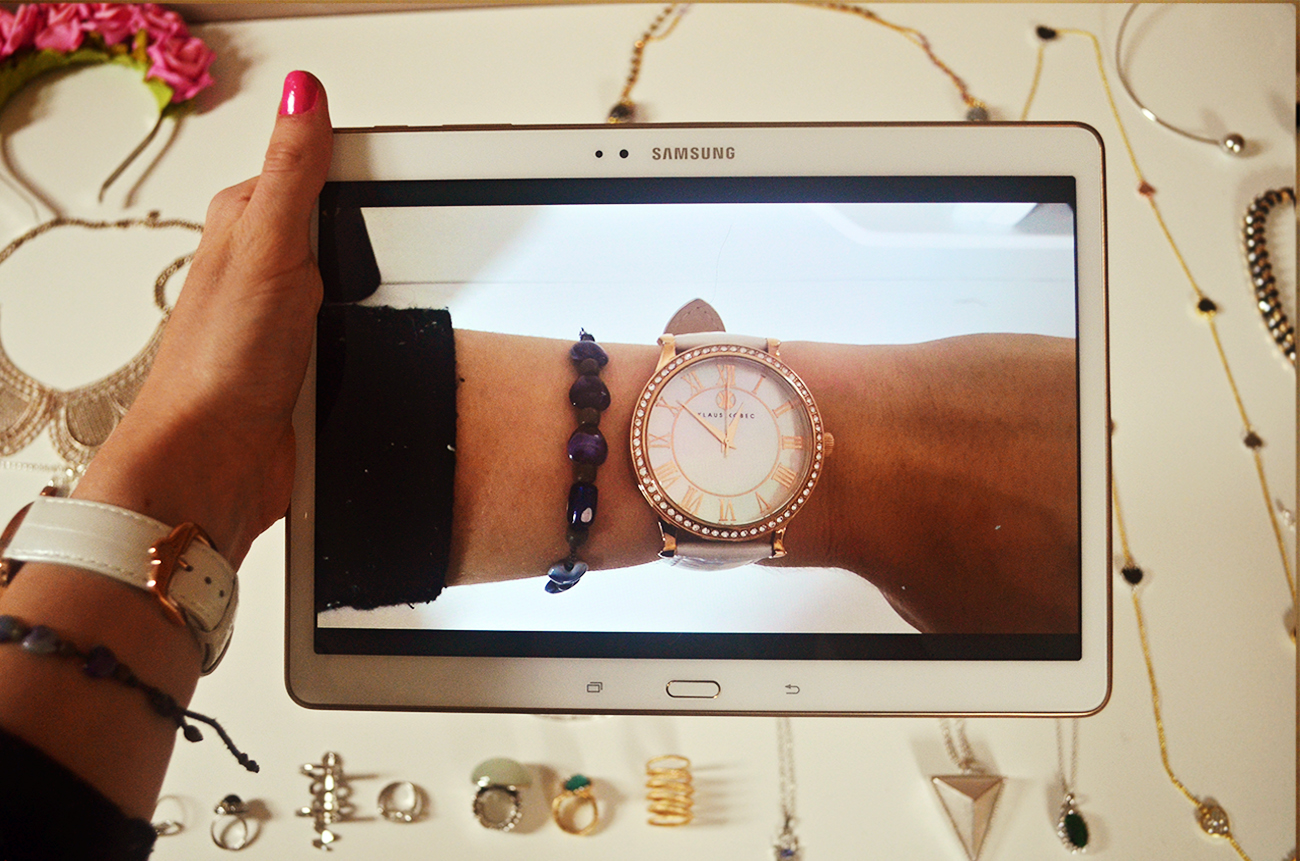 The battery life was shockingly amazing, for the entirety of the first day it lingered between 50% and only got down to 30% about 7 hours later, with me tinkering on it for hours. I’ve been so overly impressed with this device so far and cannot wait to explore shopping, blogging and using it properly day to day! 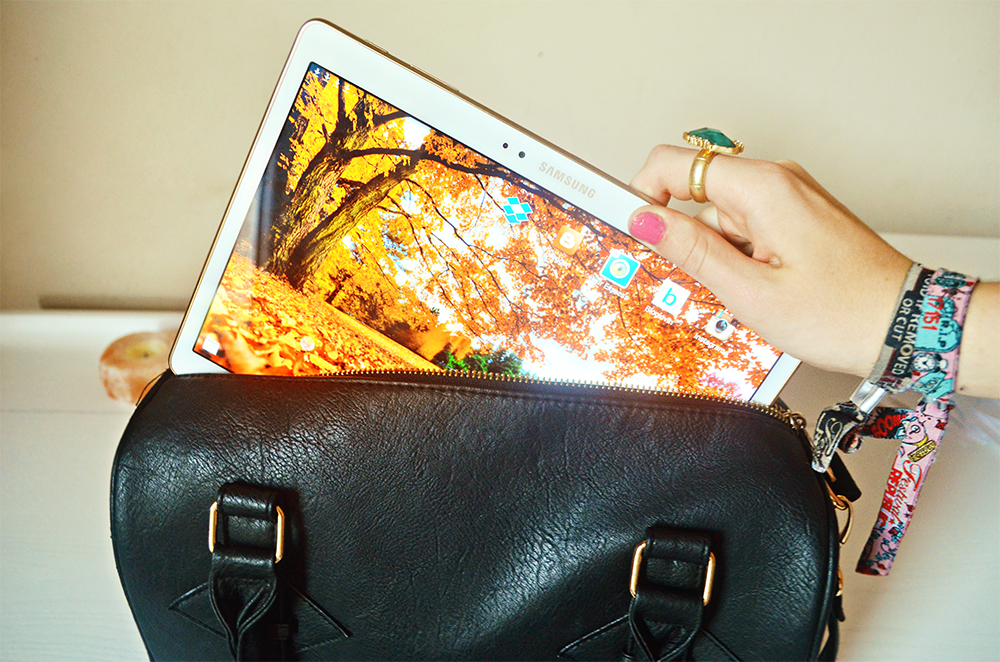 The build is chic,  a lot thinner and full of charm. The back is grippy and tucked away, framed with a chrome lining.  I love how portable this size is, a phone is lost in my bag, a 10.1 tablet barely fits and is too bulky to carry but I feel at 8.4 inches, it’s a very ideal, handbag friendly device. I can see myself putting my entire life in this, scheduling posts, managing university and planning events. As a blogger this is the ultimate necessity and accessory, next to my DSLR camera. 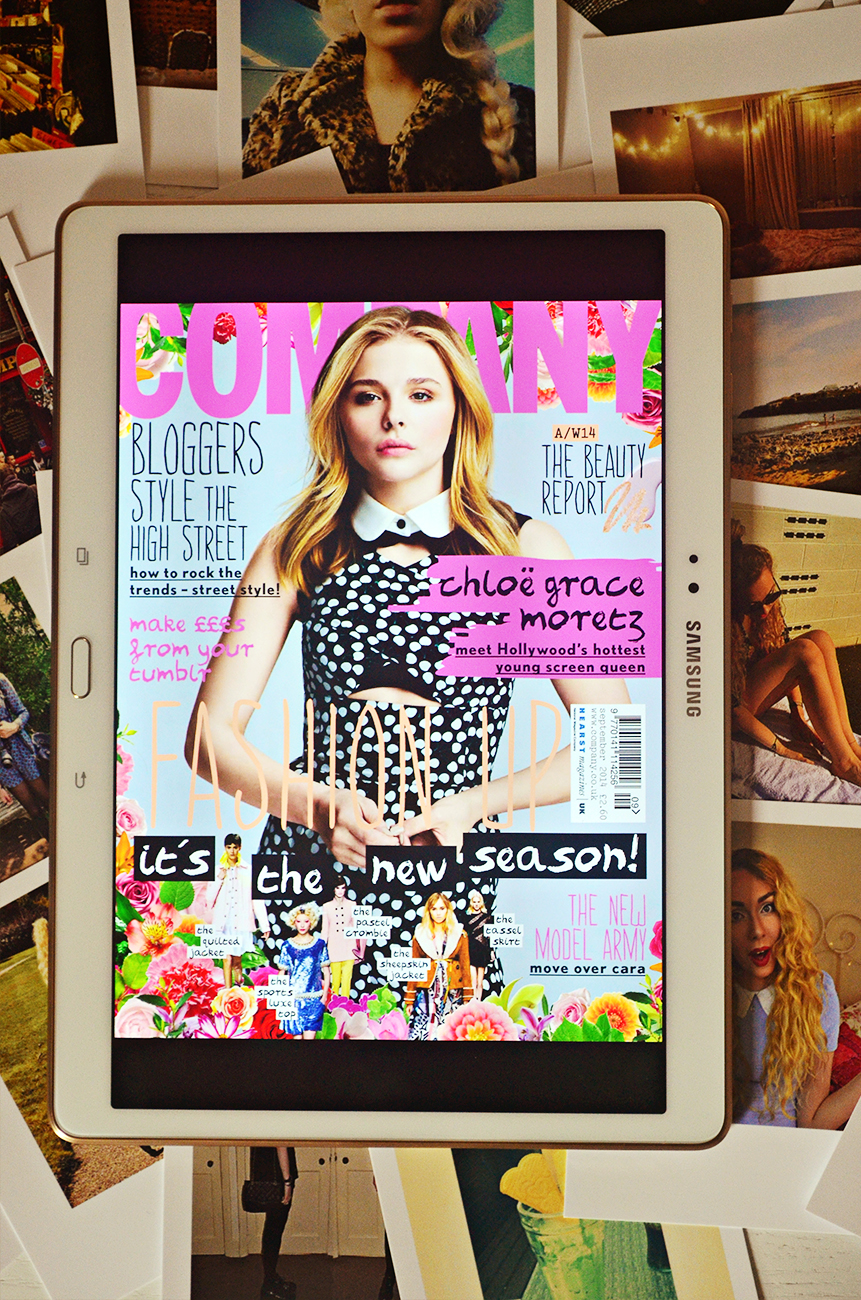 I took this for a test drive, and gave it 10 web windows of gif filled, flash animated tumblr pages to chew on and for what I would imagine could of been a nightmare, dealt quite fine with it surprisingly! An optimum device for all my magazine subscriptions and handling thousands of images every day. 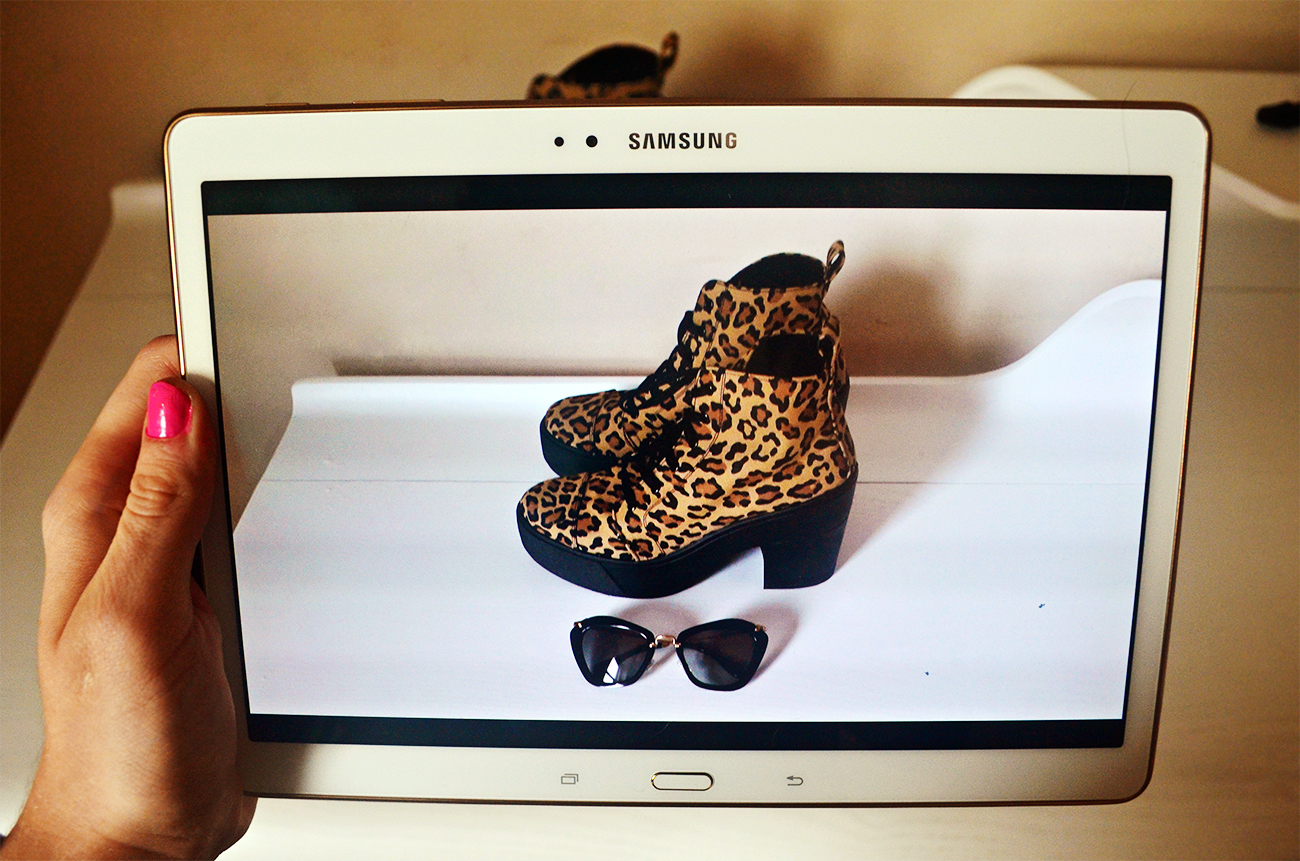 A significantly improved feature is the camera, as someone who thrives off camera quality this was a unique selling point, the results were crystal. As were the easy manoeuvrable camera ‘scene’ modes and settings, it’s never been so easy to instagram a sharp photo before! 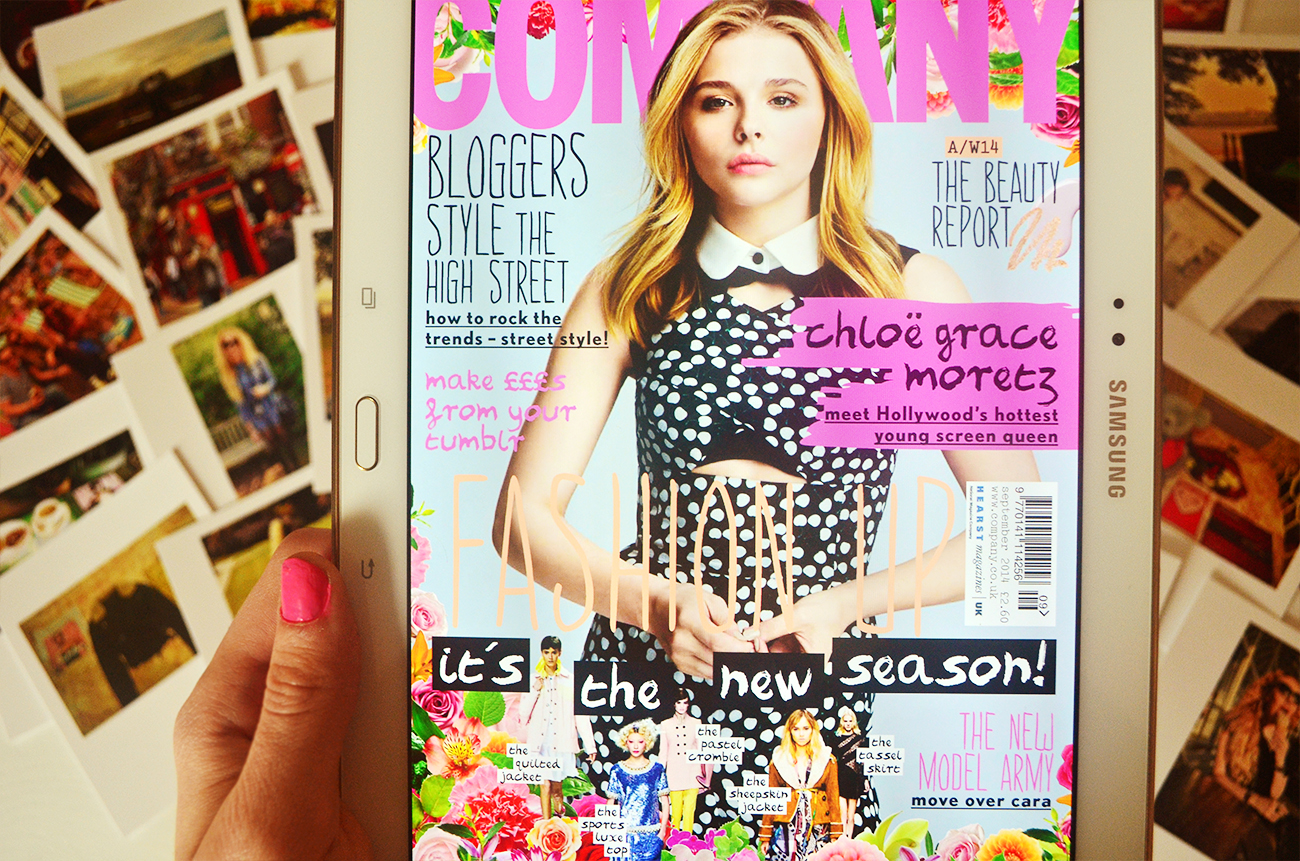 You can also choose between the 10.5-inch and 8.4-inch versions, in Titanium Bronze or Dazzling White.

Check it out here for more info and prices!!!‎ 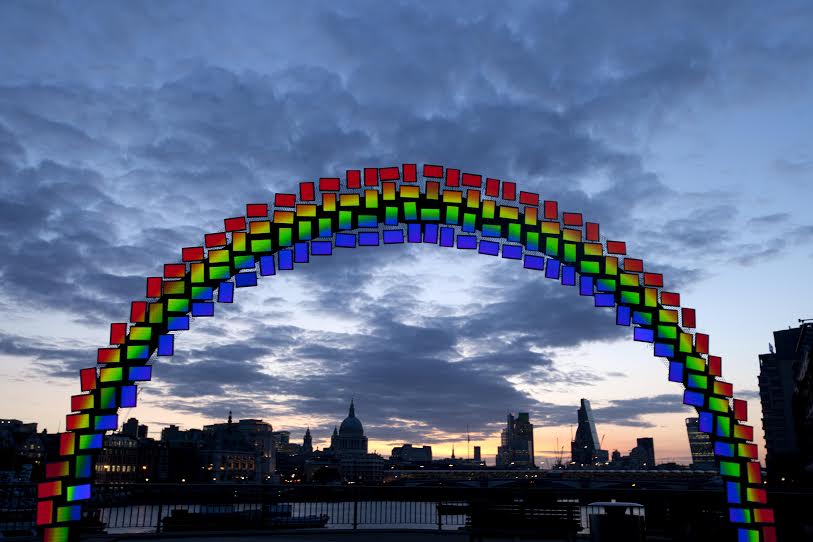 Galaxy Tab S’s used to create 26×14 foot rainbow on London’s Southbank, showcasing colour and sharpness in a way never seen before utilising 150 units of the latest and greatest tablet in all its technicolour glory – marking the first time a rainbow has ever been seen in the depths of night. The rainbow, one of nature’s most beautiful creations, is an explosion of colour in the sky after the dark of a storm. But as a rainbow can only appear when there is light from the sun (or the moon) it is impossible to see one in all its vibrant colour –
until the Samsung Midnight Rainbow.  Check it out here!

If you have any thoughts on this, let me know, have you got the new Samsung?