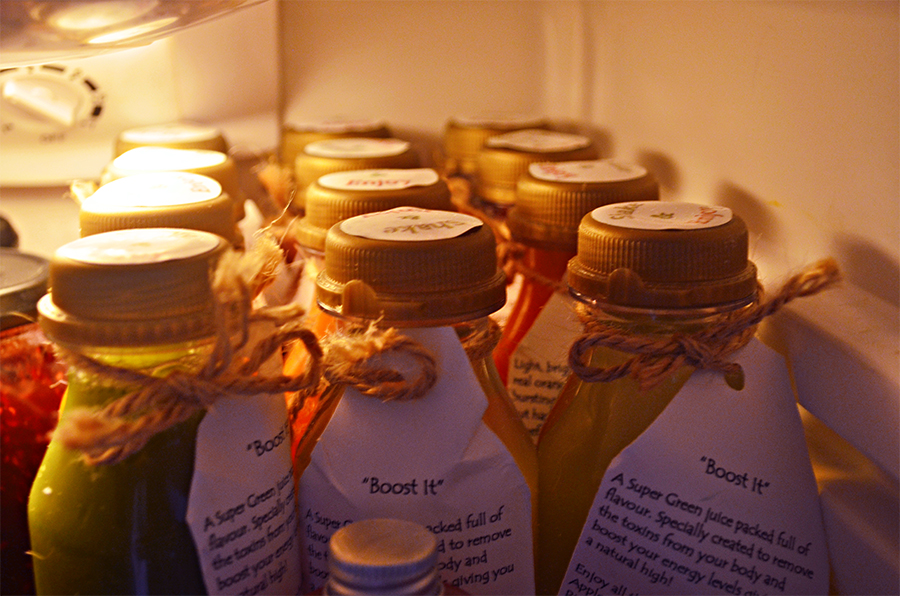 The whole juicing and detoxing world has intrigued me, we’re told every day how beneficial it is to us to cleanse our systems and eat pure substances. The effects it has on our bodies, mind and health are countless. I can only speak from experience but the most creative, clear minded times are when I have had an all natural diet, it gives me that zing, that get up and go. It was when I re-thought about this the other day that I decided it was time to cleanse my system.

I’ve done smoothie detoxes and raw diets, nothing extreme, as I had all the nutrients I needed either in my smoothie or a multi-vitamin supplement, my new Morphy Richards Blender (would highly recommend this one) certainly got a work out using spinach, summer berries, blueberries, carrots and beetroot with almond milk or soya yoghurt and a variety of other yummy potions.

But this time I felt the need to purge and flush out all the naughty stodgy foods I’ve consumed this summer and using Just Juices UK’s* juicing plan was exactly what I needed! 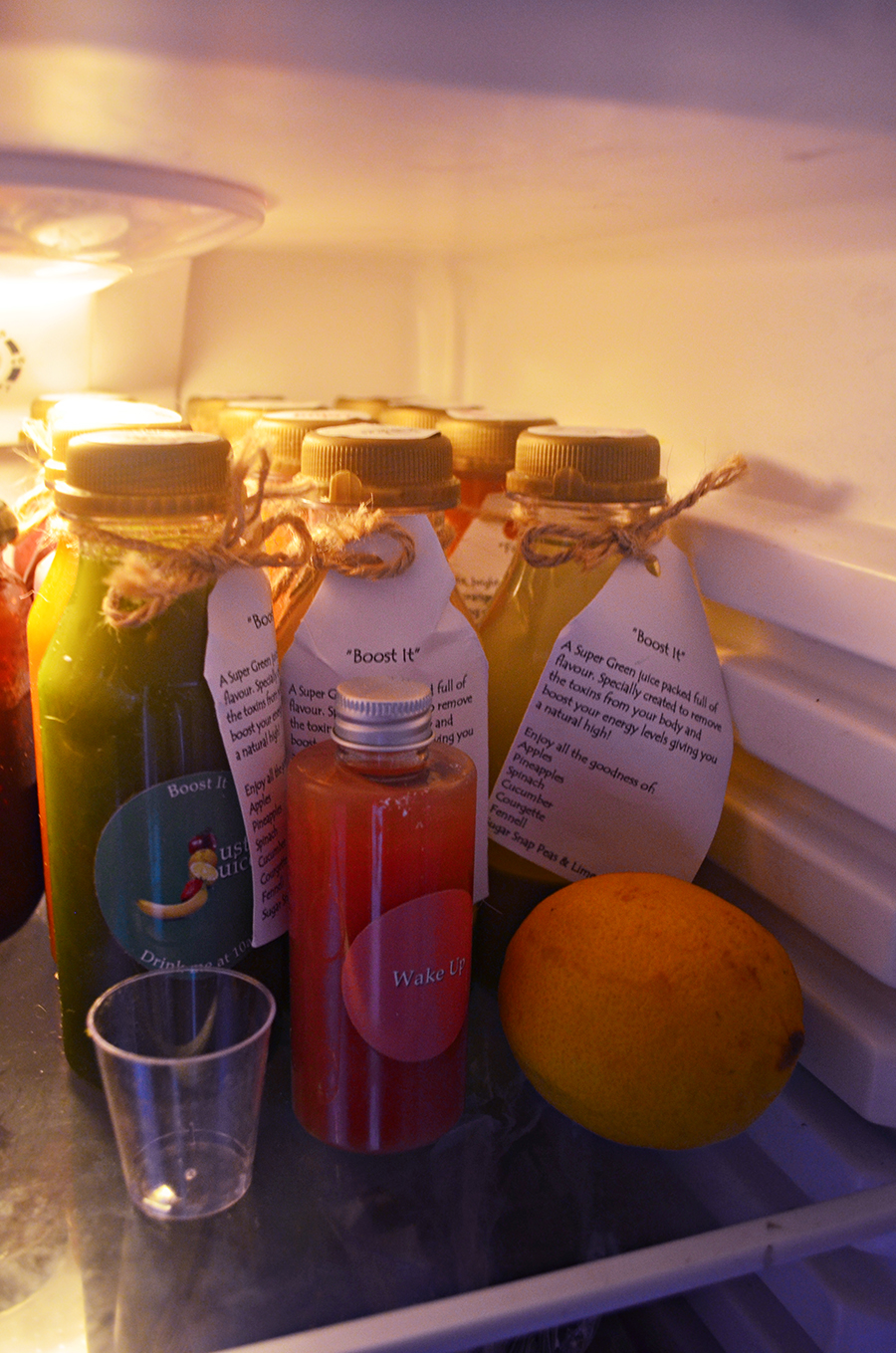 Just Juices welcome pack opens to a letter that says their 3 Day Detox is ‘designed to infuse your body with raw food enzymes, vitamins & minerals and have you feeling amazing in no time’.

The pack itself contains 12 Juices, 1 bottle of ‘wake me up’ , 1 plastic shot glass, 1 lemon, 3 herbal tea bags and lots of straws! Since returning from Leeds, I encountered Festival Fever leaving me bed bound, lusting nutrients and some TLC, so I scheduled my juicing to take place Friday-Sunday at the worst

I wasn’t able to weigh or measure myself before and after due to not owning scales but basing my conclusion on how I felt before, during and throughout

Every morning started with a ‘wake me up’ shot, it tasted zingy, and what I think was passion fruit, cranberry and grapefruit perhaps. A cup of hot lemon water and drink at the designated times labelled on each bottle;

The rules state no tea, no coffee and no food but you may have as much herbal tea, water and hot lemon that you desire. No coffee? Sounds a nightmare in the morning right? 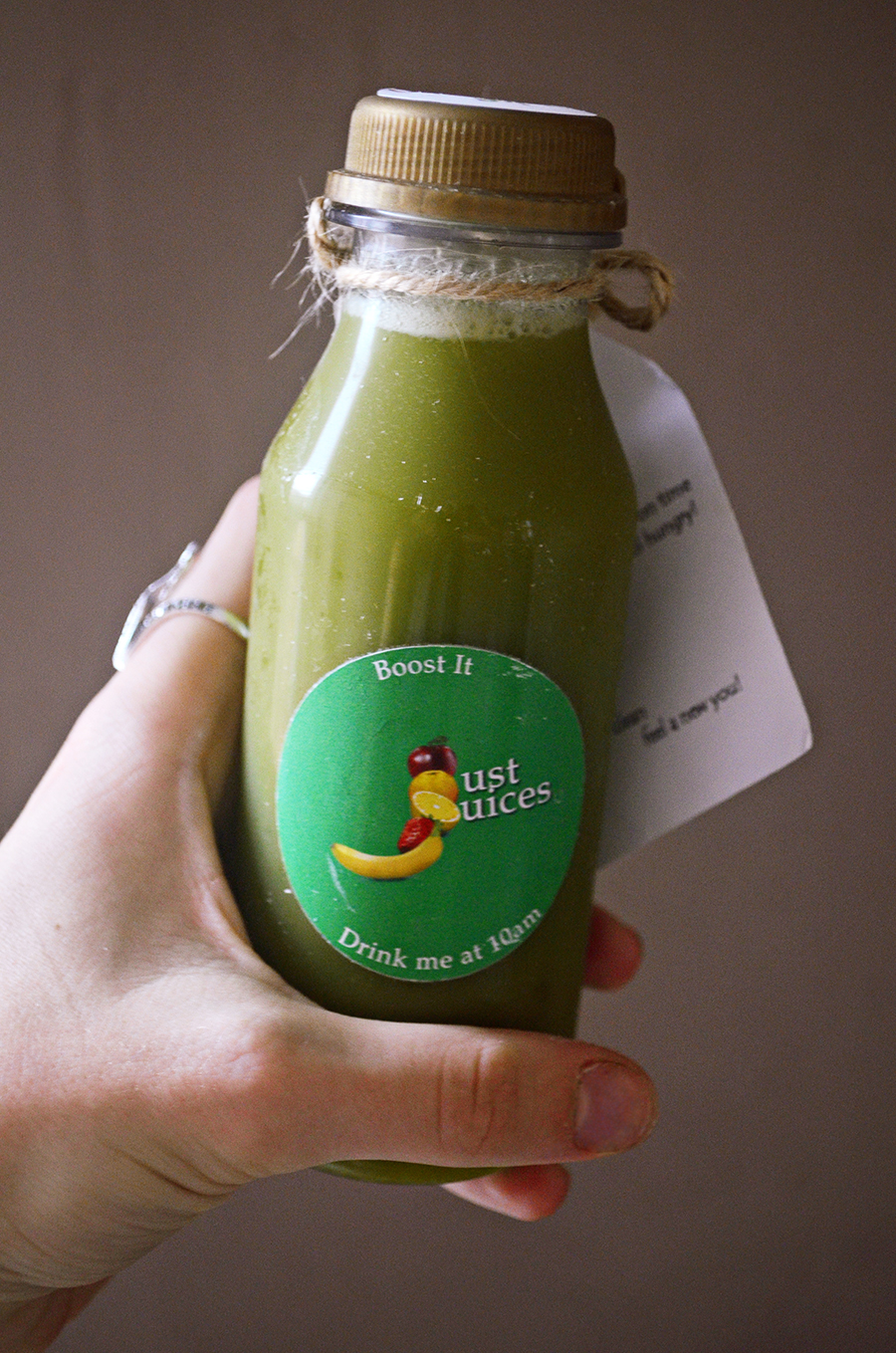 Day 1: I had my shot, and thought about how yummy it is and whether the rest were going to be the same, I researched prior on other peoples responses, they said the shot was the worst part of the day. I do admit it was a struggle climbing out of bed and generally functioning, whilst feeling ill the juice did give a great bounce in my step, before I hit the fridge at 10am for another, each as yummy as the next i found, I’m a big fruit and veg fanatic and found them all to be refreshing and suppressant.

It hit me about 9pm and I was getting the grumbles seeing my boyfriend eat, I said if that feeling was to arise was the flick of a kettle switch for another herbal tea and keep my mind pre-occupied. I found myself drinking copious amounts of water. I resisted food for one day, huzzah! Day 2: I was up and out of bed very early, eager for the shot of the day, and my next juice, constantly checking the time to see when the next one was, I thought I was invincible and could detox forever, the mornings were the easiest, which surprised me as I am a great enforcer of breakfast above any meal. Around midday the detox hit me and found it difficult co-ordinating motion to motion, I drank 2 litres of water and felt normal again. Detoxing made me very sleepy and whilst I attempting to grab an early night, I was almost clock watching from 7pm till my morning shot all throughout the night and becoming slightly addicted to juicing. 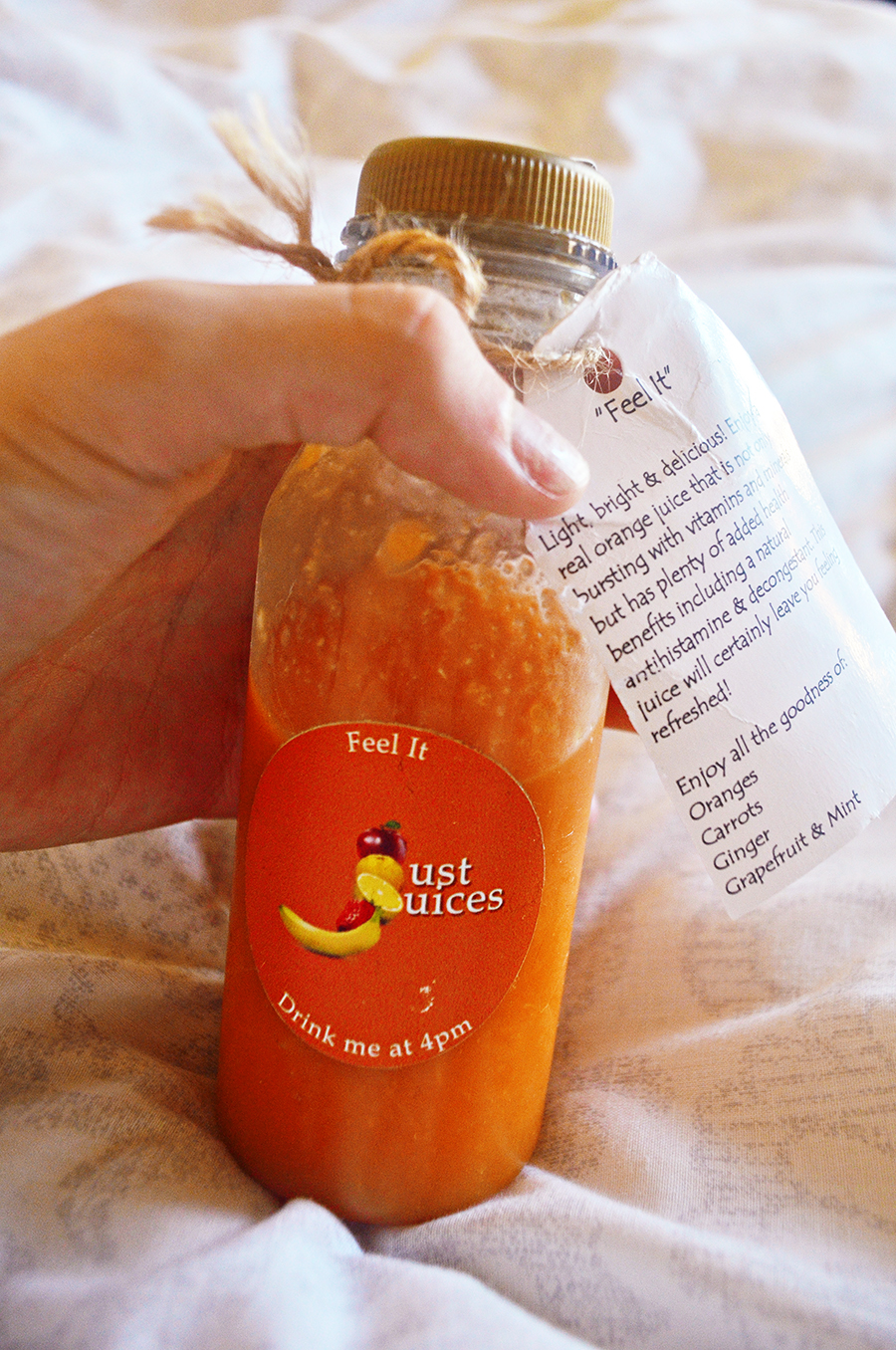 Day 3: I woke up slightly less energic than the last, perhaps my lack of sleep or flu didn’t help things but I wanted to stay in bed all day. The good news was that I felt completely cleansed, and could think more clearly, I had the most productive day of writing and photographing, all done at the pace of Speedy Gonzales. My appetite was completely gone for most the day, I fell out of sync with my timing and was having each juice 2 hours later than I should of.

I found the straws in the cupboard, tried to drink from them and found it didn’t give me any appreciation of the juices or quantity, ditching the straw idea I found myself drinking less water until the evening when I could smell biscuits. The boyfriend tormented me with a pack of bourbon creams (my favourite sweet thing) getting closer and closer and putting one near my face. Dangerous, red alarms were signalling in my head, I knew I shouldn’t be having it, but I wanted a bourbon so badly. I was a good girl and didn’t take it (but did after midnight) as well as some chips and an egg. Three days complete woohoo! 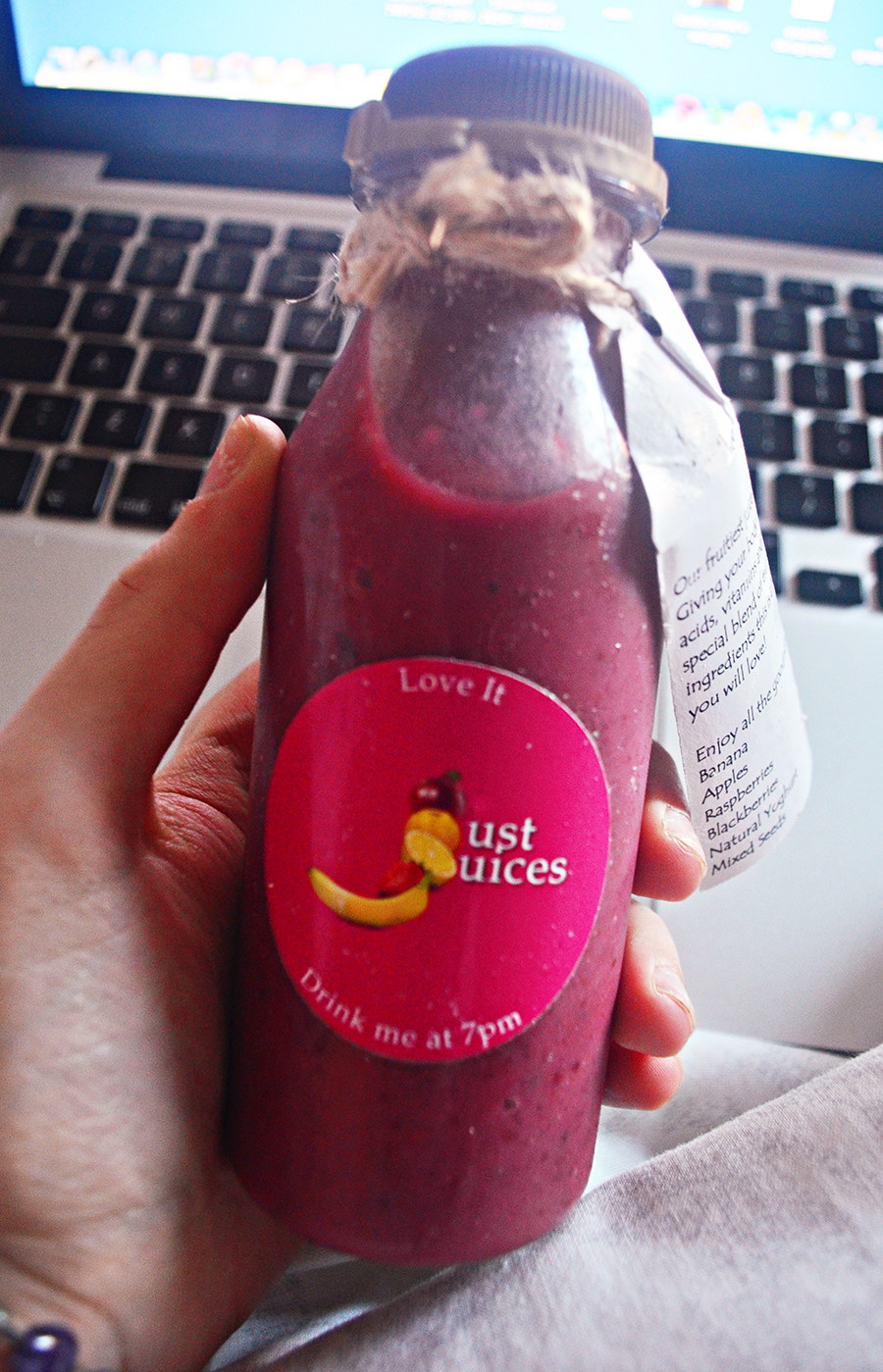 Results: After three days of no food, tea or coffee my tummy felt completely flat, a lot lighter, I could think better. Cured most of my flu and some of my spots, and whilst not exercising whatsoever like advised and also being bed bound feel I have lost a few pounds! The noticeable difference was mainly the tummy area, where water retention and food usually fills everything out! This juice cleanse was not for the purpose of losing weight but generally flushing out all bad toxins in my body. I now feel more positive, refreshed and not dependant on caffeine and stodgy food to satisfy me, I’ve cut my portions smaller and kick started me back into clean eating that I missed!

I would definitely recommend this to someone who wants to have a mental cleanse, enforce positivity and be generally a lot healthier, I want to do a juice cleanse every six months and experiment with juicing a lot more from now onwards!

To find out more about this juicing programme you can find Just Juices on Twitter @JustJuicesUK or their website at Just-juices.co.uk

Have you ever juiced before, what are your experiences of it?